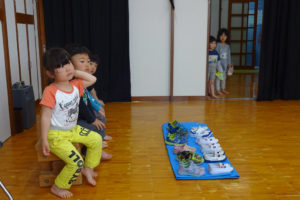 Do Japanese children?s shoes fit? The Austrian research team Children?s Feet ? Children?s Shoes went to Japan to test the fit of preschoolers? shoes in May 2017.

The team?s research has shown that wearing too-short shoes damages children?s feet. The experts have examined around 10,000 children in seven European countries, and travelled to Japan this year to continue their research.
The project in Tokyo und Nagano included nine preschools and 620 children. Working with Clemens Hagen, an Austrian orthopedic shoemaker who has lived and worked in Japan for over 20 years, the team had a look at preschoolers and the fit of their shoes.

Dr. Christian Klein, the team?s orthopedist: ?These results correspond to the findings of our European studies. In Japan, like in Europe, children?s feet are suffering damage that would be easily preventable.?
The research team recommends checking the fit of kids? shoes regularly to make sure they have at least 12mm extra space at the toe. There are two ways to do this:
To make a cardboard template, trace an outline of the foot, add 12 mm to the longest toe, then cut out a strip about two fingers wide. If the template lies flat in the shoe, then the shoe is long enough. Or use the plus12, a tool the team developed for measuring the inside length of shoes.

The team will be analyzing further data to determine the status of podiatric damage caused by ill-fitting shoes. An investigation into the fit of kids? shoes in the next age group (elementary school) is planned.

« Research team off to Japan » Back to school: 7 tips for finding shoes that fit